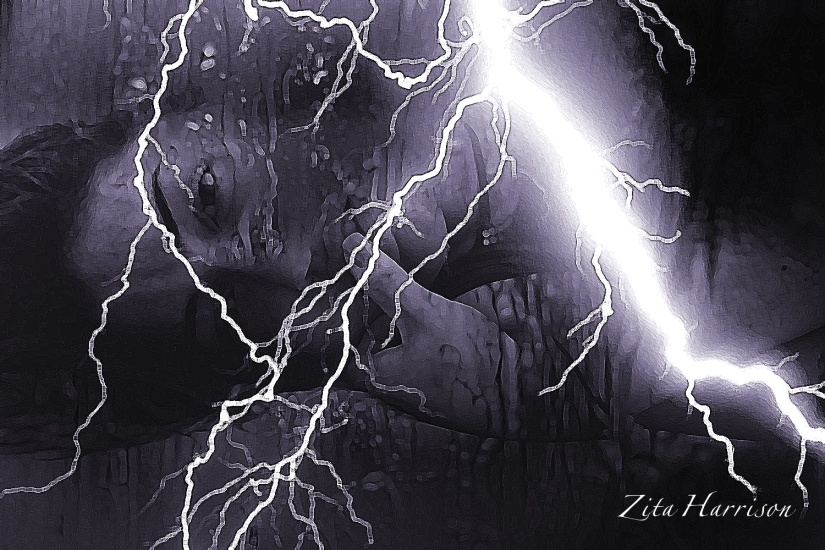 The world lit up with sudden flashes of blinding light, like angry blasts from the beyond. Big, fat raindrops erupted in torrents, pounding a savage, primordial beat that left the soul quaking and raw.

She jerked up in bed, shaken, confused, and reached out to turn on the fan, but realized the power had gone out. The air was heavy, sweltering. It was hard to breathe. The world lit up again and she dove under the sweat-drenched sheets, covering her ears with her hands to shut out the deafening cracks in the facade of the night, the glimpses of whirling, sucking horror that lay beneath. But when they came, her hands were no protection. They drilled through her head mercilessly, splitting, shattering. She tossed and turned under the covers, and finally fell into a turbulent sleep.

But there was no rest in sleep that night. She dreamed that someone lay next to her on the bed. He lay on his side, with his back to her. Something sprouted in the bottom of her gut like mold and worked its way up to her heart, clutching, squeezing. When he turned his head slowly to face her, his teeth jutted out of his mouth in a gruesome parody of a grin, and his soulless eyeballs shifted in bony eye sockets. She stared at him, telling herself that this was a dream, that it wasn’t real; it couldn’t be. It was the effect of the storm.

Suddenly she felt herself being seized by her nightgown in the back of her neck. And something sinister began throbbing in the room. Her skin crawling with fear, heart thudding painfully against her ribs, she felt herself being lifted up, up, off the bed, all the way to the ceiling. Now she was looking down at the thing on her bed, held up by the scruff like a defenseless kitten. The thing stared up at her, grinning the whole time, and the room continued oozing with something menacing, malevolent.

“What do you want from me?” she whispered, head and limbs dangling from the ceiling.

All of a sudden she plummeted to the bed with a force that knocked the wind out of her. She lay there for a few minutes, eyes closed, catching her breath, then opened her eyes and looked around tentatively for the thing lying next to her. It was gone.

Leaping out of bed, she ran to the window and threw it open. It was daylight. Somehow she had slept through the night. The sun was coming out, beaming warmth, reassurance. The air was pungent with the sweet aftermath of a cleansing rain. Shrubs and trees danced with new life, and the gentle, herby smell of chrysanthemums saturated the air.

She breathed deeply, filling every pore, every cell in her body with that smell and that warmth, and slowly exhaled.

This site uses Akismet to reduce spam. Learn how your comment data is processed.